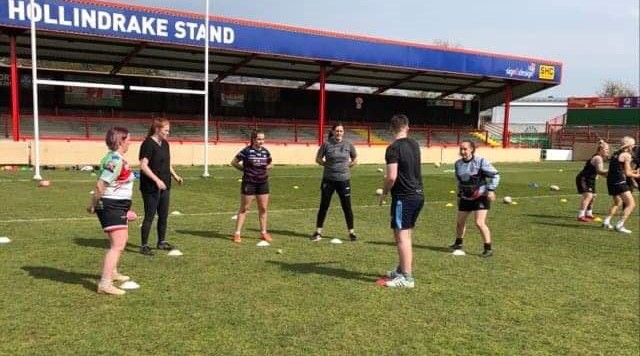 KEIGHLEY Cougars Women’s side get their 2021 Women’s Championship campaign underway this weekend.

Fourteen months on since the last time Dave Needham’s side took to the field in competitive action, they get their new season underway with three consecutive away fixtures in May starting with Sunday’s short trip to face Stanningley.

The forcibly extended off-season for the women as a result of the Covid-19 pandemic has seen Needham spend time with Head Coach Rhys Lovegrove during his preparations for the Betfred League One season that also begins this Sunday.

Following their successful 2019 season under the banner of Keighley Albion, the women will be looking to pick up where they left off prior to the pandemic in the 2021 season.

Trips to both Barrow and Widnes follow Sunday’s opener in Leeds in May before Oulton are the first visitors to Cougar Park on Sunday 6th June.

The Championship regular season then comes to an end on Sunday 12th September when the Widnes Vikings are the visitors to Cougar Park, ahead of the play-offs which begin the following week.

Two more dates to mark in the calendar come at Cougar Park on Sunday 20th June and in Brighouse on Sunday 8th August when the women renew rivalries with local rivals, the Halifax Panthers.

A combination of the men’s and women’s fixture lists and the restrictions currently in place at Cougar Park with Covid-19 means that the club is unable to organise any double headers.

As of the time of writing, all Keighley Cougars Women’s home fixtures are scheduled to be played at Cougar Park.